Gambling on Bitcoin — Is it Worth it?

Gambling on Bitcoin — Is it Worth it?

It’s safe to say that in the last few years Bitcoin has been one of those topics that has polarized the investment community. On the one side we have the diehard crypto fans who are convinced that Bitcoin represents the best investment since the dawn of time. Then we have the traditional investors on the other side who see the cryptocurrency as a highly volatile flash-in-the-pan fad that has the potential for financial ruin.

But who’s right and who’s wrong?

Can Bitcoin really take you ‘to the moon’?

Or is a currency that can jump 20% based on one man’s Twitter activity really worth the risk?

Bitcoin is a cryptocurrency or what you could also call a digital currency. It’s created and transferred using blockchain technology and despite all those shiny coins you see in Bitcoin memes, there are no physical coins or notes involved.

So it’s a digital currency that we never actually see which sounds a lot like the money in your bank account that you spend on your debit card, right?

Except the thing about cryptocurrencies like Bitcoin is that they are ‘decentralised’. That means that they aren’t regulated by a single financial authority. So no central banks or governments controlling your money.

This is a good thing because it means that cryptocurrencies are global and have the same value no matter where you are in the world.

Bitcoin came into existence on January 3rd 2009 when Satoshi Nakamoto mined the genesis block of bitcoin known as block 0. A bitcoin open source client was then released on January 9th on SourceForge.

The first ever bitcoin transaction was between Nakamoto and programmer Hal Finney. Finney downloaded the client and Nakamoto sent him 10 bitcoins on January 12th.

Nakamoto mined around 1 million bitcoins before disappearing completely. In fact, it has been established that Nakamoto was a pseudonym and the creator’s true identity remains a mystery although there are some who claim to know who he is.

In the early days, the value of a bitcoin transaction was determined by the people making the transaction. This resulted in the now famous story of 10,000 bitcoins being used to indirectly pay for two pizzas from Papa John’s.

Since then, the cryptocurrency has gone on a rollercoaster journey of varying highs and lows. However, despite the volatile nature of its value, Bitcoin has only suffered one major security flaw. This was in August 2010 when a vulnerability allowed a user to generate 184 billion bitcoins. The flaw was spotted and the transaction erased and to this day, it’s the only time that security has been compromised.

If you know one thing about Bitcoin, it’s probably that its value is incredibly unpredictable. So unpredictable that huge swings in value over a matter of days are quite common throughout its history. 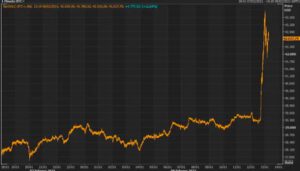 Bitcoin’s Price Surged in February 2021 When Tesla Bought $1.5 Billion Worth of the Cryptocurrency

2017 was an incredible year for anyone who invested early. The value had hovered around $1,000 for a while before an incredible months-long surge saw it climb to $20,089 by December. This was when governments, banks, and casual investors really started to take note of the cryptocurrency market.

The global pandemic in 2020 tapped into people’s fears and investors started buying bitcoin once again causing a surge to $18,353 by November 23rd. Financial experts also started to speak of Bitcoin as a store of value and as a result, institutions began to invest heavily in the currency. This caused yet another surge to reach a value of just under $24,000 in December.

This proved to be a minor blip and the following months saw Bitcoin once again rise in value. At the time of writing its current value is $59,224.50.

SO IS IT A GOOD INVESTMENT?

The general consensus is that you should only invest money that you can afford to lose and it’s very good advice for any kind of investment.

Of course, like any investment, your decision on whether to buy Bitcoin or not really depends on your willingness to accept risk.

With the volatile nature of the currency in mind, it’s impossible to say definitively whether or not Bitcoin represents a good investment. If you have patience and money that you can afford to lose, then it’s certainly worth considering. However, it’s not the kind of investment that you should borrow money for.

So take time to consider your options before making a decision one way or the other.

OTHER CRYPTOCURRENCIES WORTH INVESTING IN

So what about other cryptocurrencies? Are they as volatile as Bitcoin?

In a word, yes, although some are more stable than others and none have enjoyed the incredible surges that Bitcoin has.

If you’ve decided to give Bitcoin a wide berth, then there are at least ten other cryptocurrencies that you can take a look at (although there are hundreds more).

The ten most popular and stable besides Bitcoin are:

The two cryptocurrencies that are the most stable and have the most potential for gains are Ethereum and Litecoin.

While you may have heard of Ethereum, it’s not actually a cryptocurrency but a platform for creating decentralized products. The token that powers it, and that you can invest in is Ether. In the last year Ether has jumped from a value of around $133 to a high of $1,958.74. At the time of writing it’s currently valued at $1817.83.

Ether likely won’t make you any wild gains like Bitcoin might do but it is steadily increasing in value and looks set to continue that way.

Litecoin is very similar to Bitcoin, but it has been much more stable in terms of value. A year ago one coin was valued at around $37 and stayed pretty much the same for most of the year until a surge that started in November with one coin now valued at $202.77. Experts predict that while Litecoin may not increase in value too much over the coming months, it certainly won’t drop significantly. That said, the cryptocurrency industry is highly unpredictable so expert opinions can’t be relied upon all that much.

Hopefully now, you’re a little more clued-in with regards to investing in Bitcoin and its counterparts.

But if you take away one thing and one thing only from this article it should be this — only invest what you can comfortably afford to lose.

Did you know that you can also use Bitcoin to play casino games online? Check out these Bitcoin Casinos for more information.