THE NATIONAL SPORT OF CANADA

Ice hockey is one of the most entertaining major league sports in both the US and Canada. It’s known by many as ‘the fastest game on Earth’ and while that may not be technically true, you won’t find many sports as fast-paced or action-packed as a good game of hockey.

As you can imagine, the sport is much more popular in countries with extremely cold winters which is what makes it so appealing to both Canadians and people in northern US states. That, and the NHL of course.

And as the NHL continues to grow in popularity both in North America and beyond, and Canada prepares to launch single event sports betting, we thought we’d create this guide to help those who are interested in betting on ice hockey.

But before we talk about bets, odds, parlays, and other gambling related lingo, let’s take a look at the NHL.

The National Hockey League (NHL) has been the world’s premier ice hockey league since its foundation way back in 1917. At the beginning, it comprised only four teams who competed each season for the Stanley Cup. 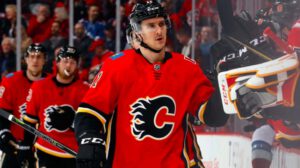 The current teams are:

A new Seattle-based franchise, Seattle Kraken, will join the league in the 2021-22 season.

The teams play in two conferences which are split into divisions — North, East, West, and Central with the top four teams from each division qualifying for the playoffs.

Since 1995, each team has played an incredible 82 games per season evenly split between home and away. These are just regular season games and do not include playoffs.

So even if you only wager on games involving your own team, that’s 82 regular season games with countless betting opportunities.

BUT WHAT ABOUT SPORTSBOOK BETTING LAWS IN CANADA?

As we mentioned earlier, the Canadian sports betting industry is primed for single event betting after the House of Commons passed Bill C-218. This legislation will allow local sportsbooks to accept bets on single games or sporting events. Until now, they were only allowed to accept parlay bets with the exception of horse racing.

However, while local sportsbooks were limited, there were no such restrictions on international bookmakers. This saw online gambling firms like Bet365 grow in popularity and until the new laws take hold, these bookmakers remain a great option for your NHL bets.

Back in the old days, betting on ice hockey, or any sport for that matter, was a simple matter of picking a winner, These days, however, there’s a lot more to it — and that’s what makes it so exciting.

There are lots of options for hockey wagers, but the most popular are moneyline, period, puckline, and game totals.

A moneyline bet is a straightforward wager on who will win the game. It’s not quite a 50/50 choice as one team may be in better form than another. Simple enough, right?

So you’ll get specific odds for each team. The favorite will often have negative odds of say -125 which means that if you bet $100 you’ll win $80 + your stake.

An NHL match consists of three periods. While the winner is the team with the most goals over the game, sportsbooks will allow you to bet on the winner of each period. It’s a fairly simple bet that adds a whole new dimension to the game.

A puck line bet gives the favourite a handicap meaning that they must win by a set number of goals. This kind of bet allows the underdog to lose but still win you your bet.

Also known as the over/under, this is a simple bet that depends on the number of goals scored between the two teams in a match.

You’ll decide whether the teams will score over or under a set number of goals. Sportsbooks will determine the over/under line. 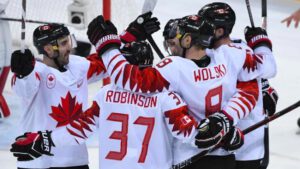 If edge of your seat viewing is your thing, then you’ll love live or in play betting.

This is when you place wagers during the game. What you can bet on depends on the sportsbook’s offerings, but generally speaking you’ll get odds on the next scorer, next goal, or possibly even who will be involved in the next fight.

Like period bets, this is a great way to add a little more in-game excitement to the whole NHL experience — not that you need much more of that of course.

Not feeling very confident about your team’s chances? Then you can take the option to cash out prior to the final result. Say, for example, you have backed your team to win and they are in the lead 1-0. But then your goaltender takes a big hit and seems a little shaky on his feet. You can decide to cash out for a percentage of your original odds.

This is when you bet on a series of matches. If your first bet comes in, the winnings are then placed on your next bet and so on. If an accumulator comes in, you’ll usually win big, but these are tough bets to win.

We could list dozens of strategies and countless tips for your NHL bets, but the truth is that you just need to follow these three golden rules.

ALWAYS DO YOUR RESEARCH

And we mean ALWAYS. With 82 regular season games, you can be guaranteed that injuries and form will play a huge part in the success of a team. That means that you simply must do your homework and pay close attention to who is available to play for each game.

You should also take a look at historical data for specific matchups. Some teams simply can’t get past their bogey team even when they’re on a solid run of form.

The goaltender is one of the most important positions on the ice and how your goaltender is playing right now can have a big impact on results. Confidence, current form, injury worries — take it all into account before placing your bet.

STICK TO YOUR BUDGET

Perhaps the most important rule of them all is one that applies to betting in general — only bet what you can afford to lose. That means setting yourself a budget and sticking to it no matter what.

Ideally, you shouldn’t include your winnings in your budget. Win big and keep the cash — don’t bet it all on a sure thing just because you have it.

That’s all there is to it. Now that you understand the basics of ice hockey betting, it’s time to get out there and do your research. And if you win big, just remember who it was that got you started!